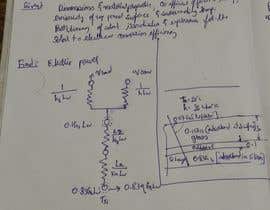 A photovoltaic panel consists of (top to bottom) a 3-mm-thick ceria-doped glass (kg = 1.4 W/m-K), a 0.1-mm-thick optical grade adhesive (ka = 145 W/m-K), a very thin layer of silicon within which solar energy is converted to electrical energy, a 0.1-mm-thick solder layer (ksdr = 50 W/m-K), and a 2-mm-thick aluminum nitride substrate (kan = 120 W/m-K). The solar-to-electrical conversion efficiency within the silicon layer eta decreases with increasing silicon temperature, Tsi, and is described by the expression eta = a - bTsi, where a =_0.553 and b = 0.001 1/K. The temperature T is expressed in kelvins over the range 300 K < Tsi < 525 K. Of the incident solar irradiation, G = 700 W/m2, 7% is reflected from the top surface of the glass, 10% is absorbed at the top surface of the glass, and 83% is transmitted to and absorbed within the silicon layer. Part of the solar irradiation absorbed in the silicon is converted to thermal energy, and the remainder is converted to electrical energy. The glass has an emissivity of = 0.90, and the bottom as well as the sides of the panel are insulated. Determine the following
(a) The electric power (P) produced by an L = 1-m-long, w = 0.1-m-wide solar panel for conditions characterized by h = 35 W/m2-K and T∞ = Tsur = 25 oC.
(a) The concentration of sunlight onto photovoltaic cells is desired since the concentrating mirrors and lenses are less expensive than the photovoltaic material. Consider the solar photovoltaic cell that is described above. A 100 mm x 100 mm photovoltaic cell is irradiated with concentrated solar energy. Since the concentrating lens is glass, it absorbs 10% of the irradiation instead of the top surface of the solar cell, as in Example 3.3. The photovoltaic cell is cooled by air directed parallel to its top and bottom surfaces. The air is 5 m/s, and the bottom surface is coated with a high-emissivity paint, b = 0.95. Determine the electric power produced by the photovoltaic cell and the silicon temperature for a square concentrating lens with Llens = 400 mm, which focuses the irradiation falling on the lens to the smaller area of the photovoltaic cell. Assume the concentrating lens temperature is 25oC and does not interfere with boundary layer development over the photovoltaic cell’s top surface. The top and bottom boundary layers are both tripped to turbulent conditions at the leading edge of the photovoltaic material. Calculate the electric power output of the photovoltaic cell and the silicon temperature over the range 100 mm < Llens < 600 mm.

The main objective of this project is to increase your ability to solve real world engineering problems which are characterized to be not well defined. That is, the given data is not enough to solve the problem. Thus, one has to make many decisions and careful assumptions such that it can be solved to meet the desire needs.

Please use the basic thermal resistance concept that we discussed in chapter # 3, while for part (b) you have to calculate the heat transfer coefficient. Note that the top and bottom boundary layers are both tripped to turbulent conditions at the leading edge of the photovoltaic material. Also make use of EES or EXCEL program to carry out parametric investigation; it will add value to your effort.

Your report should include basic introduction to the problem and schematic, the calculations procedure with relevant equations. An executive summary describing the highlights of your achievements should be provided. Be sure to state all assumptions clearly.

Top entries from this contest

How to get started with contests